Heart of the Rockies Plus Rail - Tour 1A 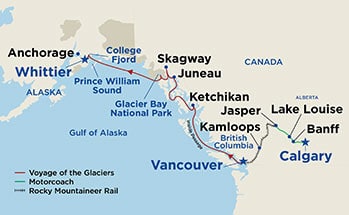 Spend some time in Calgary before crossing the Rockies to the charming mountain resort of Banff.You'll have time to explore the Banff National Par before you head to Lake Louise for a stay at the Fairmont Chateau Lake Louise. Travel one of the most scenic drives Icefield Parkway through the Rockies and walk on a glacier.. The Rocky Mountaineer will cross the North Thompson River several times before arriving in Kamloops.After your departure from Kamloops, follow the Thompson River and give way to the high, steep walls and "40 miles of hell" of the Fraser Canyon. The route passes over 28 bridges and through 23 tunnels and snow sheds between Kamloops and the small town of Boston Bar. Travel through the fertile Fraser Delta en route to Vancouver aboard the Rocky Mountaineer.After spending the night in Vancouver you'll enjoy city sightseeing including Stanley and Queen Elizabeth Park on your way to embark the ship. There's so much more ahead of you on your journey. Transfer to your Princess ship and set sail for your 7-day Alaska cruise!

From Vancouver, you head north to Ketchikan, Alaska's southernmost city. While there, you'll have time to visit the area's major attractions including the Misty Fjords. You'll continue your trip up the coast, making stops in the Alasan capital of Juneau and Skagway. You'll spend a day cruising through Glacier Bay National Park and another day cruising through the College Fjord before arriving at your final destination in Anchorage.
Call Us Today at 1.888.804.CRUISE (2784)

Arrive in Calgary by air and spend the rest of the day at leisure. Meet your traveling companions at a welcome reception hosted by your tour director.

Before departing the city sightsee some of the local highlights of Calgary via a morning orientation tour. Drive west following the Trans-Canada Highway, watch the Olympic city dissolve into the foothills, as the majestic Rockies rise ahead. Pass by the Three Sisters, Fairholme and Rundle Ranges enroute to one of the best known destinations in the Rockies, the charming mountain resort of Banff. Overnight Fairmont Banff Springs Hotel. (B,D)

Cherished by Canadians, Banff National Park is renowned around the world as a protected paradise with 6,641 square kilometers of mountains, forests, and lakes to explore. Banff National Park is set in the heart of the Canadian Rockies. It attracts roughly 4 million visitors each year. It's also a UNESCO World Heritage Site. Today's sightseeing will highlight many local delights including Bow Falls, and the Hoodoos. Also included in your sightseeing is a ride up the Banff Gondola for a panoramic 360 degree view of the six surrounding mountain ranges. Overnight Fairmont Banff Springs Hotel. (B,D)

Today's sightseeing will include some of the most famous features in the Canadian Rockies. With the Fairmont Chateau Lake Louise proudly standing at one end and the Victoria Glacier reflecting off the other, Lake Louise is one of the sights most often preserved in photographs by visitors from all over the world. En route to Lake Louise, your tour will take you to Moraine Lake, located in the dramatic Valley of the Ten Peaks. Here, ten mountain peaks soar above 10,000 feet and surround the tranquil waters of the lake. After checking in at the hotel, the rest of the day is free to fully enjoy the beauty of this famous location. Overnight Fairmont Chateau Lake Louise. (B,D)

Highway 93, known as the Icefield Parkway, qualifies as one of the most scenic drives in the world. It traverses more than 100 glaciers, pristine lakes and some of the highest Rockies. Stop at the Columbia Icefield where an experience of a lifetime awaits! Shuttle to the Athabasca Glacier where you will board a unique, specially designed Ice Explorer for a guided tour onto the surface of the Glacier. A buffet lunch at Columbia Icefield Chalet is included. Your overnight destination is the charming village of Jasper in Jasper National Park. Overnight Fairmont Jasper Park Lodge. (B,L,D)

Board Rocky Mountain Rail Tours' "Rocky Mountaineer." Your redleaf rail adventure begins as you board the train and depart Jasper, traveling along the Miette River to Yellowhead Pass. The pass is one of the lowest points on the continental divide and sits on the border between Alberta and British Columbia. Just past Yellowhead Lake, you'll meet up with the headwaters of the Fraser River. This scenic route is dotted with mountain streams and lakes. The Rocky Mountaineer will cross the North Thompson River several times before arriving in Kamloops. Continental breakfast, lunch and snacks are included onboard. Overnight at a Kamloops hotel. (B,L,D)

Soon after your departure from Kamloops, follow the Thompson River and watch the landscape give way to the high, steep walls and "40 miles of hell" of the Fraser Canyon. Sit back in comfort while the train winds along canyon walls and through the deep tunnels constructed by the railway while facing impossible odds. The route passes over 28 bridges and through 23 tunnels and snow sheds between Kamloops and the small town of Boston Bar. Travel through the fertile Fraser Delta en route to Vancouver. Breakfast, lunch and snacks will be served at your seat and is included while aboard the Rocky Mountaineer. Transfer from the train station to your hotel and enjoy a farewell dinner with your tour director. Overnight at a Vancouver Hotel. (B,L,D)

Enjoy city sightseeing of Vancouver including Stanley and Queen Elizabeth Park on your way to embark the ship. There's so much more ahead of you on your journey. Transfer to your Princess ship and set sail for your 7-day Alaska cruise!

* Can be added during or after initial reservation.
** Unless indicated otherwise.

Choose the month and port to see average expected weather for that region.

← Choose your month and port...