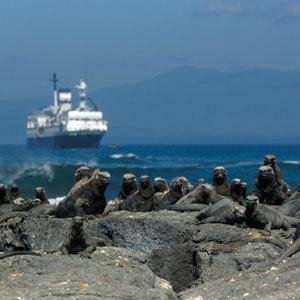 Ecuador & Its Galápagos Islands with the Amazon

This exciting cruise vacation lets you sample the natural wonders of Ecuador and its Galápagos Islands. Enjoy guided sightseeing in Quito and have your photo taken at the "Center of the World." You'll also explore one of the oldest streets in Quito to visit with local artists and taste some Ecuadorian chocolate at a chocolate factory. Before taking to the sea, a highlight of your trip will be a visit to the Charles Darwin Research Station to learn about conservation efforts for the giant tortoises. Then, embark on an exciting 4-night cruise among various Galápagos Islands on the recently refurbished Treasure of Galápagos. Have your camera ready as your Naturalist points out colonies of sea lions, pelicans, albatross, several species of Darwin's finches, marine iguanas, flamingos, masked boobies, blue-footed boobies, frigatebirds, storm petrels, short-eared owls, and other birds. Each day venture to a new island which is home to species found nowhere else in the world! You'll also have a chance to snorkel in the tropical waters and perhaps get a look at sea turtles, sharks, and rays.Following your adventure around the Galápagos Islands, continue on to encounter a new set of flora and fauna in the Amazon! From Quito, fly to Coca and travel by canoe to your Amazon lodge for a 3-night stay that includes a rainforest canopy walk, a guided night tour to see the wildlife that comes out at night, cruises through the flooded forest, and spend time with the natives on a visit to a local village and school. A remarkable cruise adventure!
Request More Information

Avalon has designed included activities with a choice of experiences. We invite you to select the tours, activities, and events that interest you most, so you can experience your cruise your way. There are 3 types of included shore excursion on every Europe cruise:

Classic
Your local expert is ready to guide you through the history and heritage of local destinations. You’ll marvel at the legends, lore, and spectacular architecture of iconic and historic sites.
Discovery
We’ve found inspiring and interactive activities to speak to your interests — from cooking classes, to painting workshops — to immerse yourself in each culture you explore.
Active
Embark on energetic excursions to keep you in motion and on the go — from a guided jogging tour of Amsterdam, to biking, paddling, and hiking your way through scenic locales. 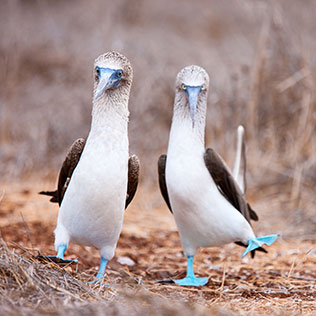 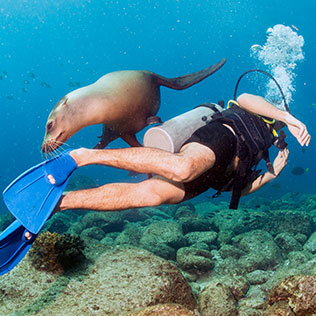 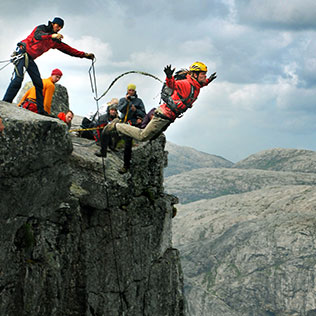 Bienvenido a Ecuador! South America’s Most Biodiverse Country
Take free time today to relax and prepare for your upcoming Galápagos adventure, or walk through the historic city to sample ceviche or helado (Latin-American ice cream). Dine out tonight or ask about the best clubs for music and dancing.

A Gold Altar, Artistic Avenues, and Two Hemispheres in One Day
Classic
Take a Guided Sightseeing Tour of Quito that showcases the colonial city’s historic sites, including the impressive Legislative Palace with its enormous sculpted mural of Ecuadorean history. You’ll also see Independence Plaza and visit the 16th-century San Francisco Monastery, and La Compañía Church—the exquisite Jesuit cathedral with its spectacular Spanish baroque architecture—more than 160 years in the making.
Discovery
Take a Guided Walk down Calle La Ronda—one of Quito’s oldest streets—with a wealth of artist’s workshops and galleries where you’ll meet local artists and learn about their original works. Later, visit a local chocolate factory for a tour and a tasting to discover why Ecuador is one of the world’s finest chocolate producers.
Classic
Your day in Quito ends with a Guided Excursion to the Ciudad Mitad del Mundo—a monument to the Equator—the “middle of the world.” Stand in both the Northern and Southern Hemispheres at the same time at the exact location of the Earth’s Equator. Observe the equatorial effects of the dual-spiraling directions of water and balancing eggs on end.
This evening, enjoy a welcome dinner with delicious regional cuisine.
(B,D)

The Theory of Evolution—and Giant Babies
This morning, take a flight to the Galápagos island of Baltra where you’ll embark on your five-day cruise aboard the Treasure of Galápagos.
Discovery
Join your naturalist on a Guided Excursion to Santa Cruz Island to visit the Charles Darwin Research Station— established to help conserve the Galápagos’ natural habitat and protect the famous giant tortoises. While here, learn about the tortoise-rearing program and see many of the various islands’ tortoises.
Later on board your ship, join in a briefing of the next day’s adventures, and enjoy a Captain’s welcome with cocktails and dinner.NOTE:
The ship’s itinerary may vary according to Galápagos National Park policies and regulations, weather conditions, and seasonal changes to create the perfect cross-section of sites visited.
(B,L,D)

Volcanoes, Marine Life, and Lunar Landscapes
Discovery
This morning, you will find yourself anchored in the western-central part of the archipelago where volcanoes are still active, attributing to the dramatic scenery. Take a Naturalist Led Excursion of Sullivan Bay on Santiago Island where you will walk on newly-formed (less than 100 years ago) lava flows reminiscent of the lunar landscape. You can catch sight of lava lizards, marine iguanas, Sally Lightfoot crabs, and even the Galápagos penguin.
This afternoon, cruise to Bartolomé Island.
BARTOLOMÉ ISLAND
Hike the Summit, Snorkel, and Swim
Active
Take a Guided Hike to Bartolome’s 114-meter summit for spectacular panoramic views of the region with two beautiful bays and fascinating formations of lava flows and spatter cones, including the iconic Pinnacle Rock. Later, take a snorkel and swim off the beach here—home to playful sea lions, Pacific green turtles, white tip reef sharks, and Galápagos penguins.
(B,L,D)

Tracing Darwin’s Footsteps and Audubon’s Muses
Discovery
This morning, take a Naturalist-Led Excursion to South Plaza Island to observe wildlife, including sea lions, land iguanas, marine iguanas, and hybrid iguanas (only found on this island and a result of a cross between land and marine iguanas). You will see blue-footed boobies, Nazca boobies, frigate birds, swallow-tailed gulls, Audubon’s shearwaters, and many other species.
This afternoon, cruise to Cerro Brujo on San Cristobal Island.
SAN CRISTOBAL ISLAND
Blue Herons, Blue Lagoons, and a Sleeping Lion
Active
Take a Guided Walk at the site where Charles Darwin first visited the Galápagos. See the volcanic remains of magnificent Kicker Rock—also called León Dormido (Sleeping Lion). Walk beside one of the island’s blue lagoons to see a number of migratory birds, including pelicans and great blue herons.
(B,L,D)

The Geological Genesis of a Magical Archipelago
Discovery
This morning, cruise to Puerto Baquerizo Moreno for a Naturalist Guided Tour of the San Cristobal Interpretation Center. You’ll learn about the Galápagos’ fascinating volcanic origins, remote location, climate, and the arrival of diverse species that inspire both imagination and science.
This afternoon, you’ll say farewell to the magical islands of Galápagos and fly to Quito. This evening, spend free time relaxing or enjoy one of Quito’s many fine restaurants.
(B)

Fly from Quito to Coca and travel by boat down the Napo River to a small tributary where you transfer to a dugout canoe for the remainder of your journey to your Amazon lodge. Floating along the narrow river, discover the Ecuadorian Amazon, the world’s largest remaining tropical rainforest, where more life hums, buzzes, chatters, and bubbles than anywhere else on the planet. One Amazonian tree can host more ant species than all of the British Isles put together, one hectare of forest boasts almost as many frog species as all of North America, and the great expanse of jungle contains more than 20% of the Earth’s vascular plant species. You can find a monkey small enough to sit on your fingertip, an 8-pound toad, a spider that eats birds, and the world’s largest snake—the 30-foot-long anaconda.
(B,L,D)

Early this morning, your Naturalist brings you to a parrot clay lick to see parrots, macaws, parakeets, and other species feeding. Next, a walk through the jungle introduces medicinal plants and immense biodiversity that have been used by native cultures for hundreds of years. Tonight, accompany your Naturalist on a night walk or canoe ride to discover creatures rarely seen during the day—you many even spot a caiman or two!
(B,L,D)

This morning, depart on a Napo River cruise through the flooded forest in search of the varied wildlife. Here, you will have a good chance of seeing troops of squirrel, capuchin, and howler monkeys, and maybe even the incredibly well-camouflaged 3-toed sloth. Later, visit a local community, school, and village, and spend some time with the natives to learn about their culture and way of life. Finish your day fishing for piranhas or even taking a refreshing swim in the same waters—the less brave can send their guide in first.
(B,L,D)

Depart by canoe this morning in search of monkeys, giant otters, and rare birds on your return to Coca for your flight to Quito.
(B)

Your vacation ends with breakfast this morning.
(B)
Need more information?
Having trouble deciding which cruise is right for you?
Call Us Today at 1.888.804.CRUISE (2784)
Back To Itineraries