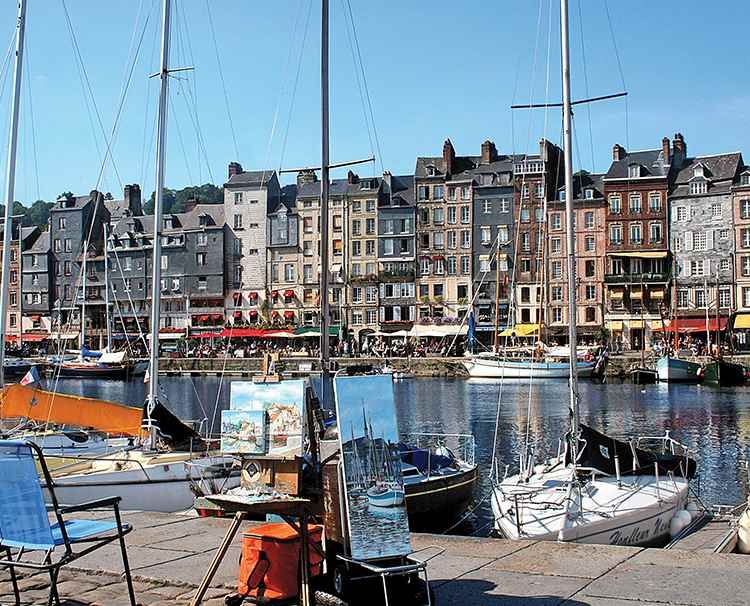 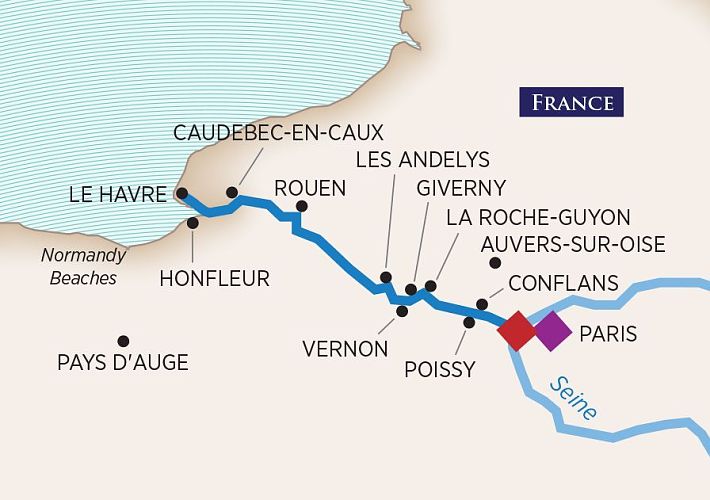 Paris always sizzles while Normandy beckons with its stunning coastline, incredible food and artistic beauty. Monet’s Gardens and the charming harbor town of Honfleur, will inspire you the same way as they inspired the great Impressionists. For inspiration of a different kind, travel the “Routes des Abbayes,” visiting some of the most magnificent monasteries, and to the unforgettable beaches of Normandy where Allied forces landed during WWII’s D-Day invasion. Relive the grandeur of royalty at Château de Bizy, once referred to as “the Versailles of Normandy,” and taste your way through Northern France, sampling local wines, apple cider, Calvados, pommeau and French cheeses for an authentic epicurean adventure.
Request More Information

Board the ship in Paris for your Paris & Normandy cruise. (D)

Uncover the history of Château Gaillard, the former stronghold of Richard the Lionheart, situated on the chalk cliffs high above the Seine, on a morning tour. Or, if you prefer a more active adventure, you can hike there from the banks of the Seine, admiring the scenic views along the way. For those who wish to explore the area on two wheels, join a guided bike tour through the charming town of Les Andelys. After your adventures, set sail along the meandering Seine for a scenic cruise. (B,L,D)

There are several different choices of excursions, both during the morning and afternoon, depending on your interests. You can choose between an excursion to the seaside town of Honfleur, renowned for its picturesque harbor, and for being an inspirational site for Impressionist painters; or enjoy a full-day excursion that includes Honfleur and the delicious Pays d’Auge region of Normandy, where apple cider, Calvados and pommeau outrank French wine. During the afternoon, be led on a guided tour of the Fécamp Monastery, with its unusual half-Gothic, half-Renaissance appearance, and later taste Bénédictine, a subtle blend of 27 plants and spices selected by the Master Herbalist. Alternatively, join a city tour or bike tour through the UNESCO-designated Le Havre. (B,L,D)

Experience the Normandy region with one of three tours. For those wishing to go to the American sector of the historic Normandy Beaches, you will visit the cemetery at Colleville-sur-Mer, Omaha Beach, the artillery battery at Longues-sur-Mer and the village of Arromanches, where the remains of the floating harbor used during the WWII landings can be seen. If you prefer, you can tour the Gold and Juno beaches in the British and Canadian sectors, where you will visit Ranville Cemetery, Pegasus Bridge, the Canadian cemetery at Beny-sur-Mer, the WWII museum in Courseulle and, finally, Arromanches. If you wish to experience a different kind of inspiration in Caudebec-en-Caux in the afternoon, the Romanesque Normandy Abbey Route will take you to one of the magnificent historic abbeys of the region. Or you can journey back in time with the interactive exhibits and vessels at the Seine Museum. (B,L,D)

Spend the morning enjoying medieval Rouen with a choice of several excursions. Join a walking tour and see the square where Joan of Arc was martyred, as well as the Medieval Quarter and Great Clock. You also have the choice of a bike tour through Rouen. In the afternoon, explore Lyons-la-Forêt, built on the site of a former fortress and featuring remarkable centuries-old architecture, or go on the “Tastes of Normandy” tour, where you’ll be treated to the delicious flavors of the region, including chocolate, macaron, Norman cheese and cider. (B,L,D)

*PLEASE NOTE:Monet’s Gardens may be closed; therefore, an alternative tour will operate instead.

Take in the beautiful sites of Paris on your way to the Musee du Vin, Paris’s famous wine museum, which is located in the heart of the city not far from the Eiffel Tower. Explore the permanent collection, which contains more than 2,200 items that pay tribute to generations of winemakers, cellar masters, oenologists and coopers. Alternatively, cycle along the Seine River and travel along the hidden passages of Paris. (B,L,D)

Bid farewell to Paris and prepare for your flight home. (B)
Need more information?
Having trouble deciding which cruise is right for you?
Call Us Today at 1.888.804.CRUISE (2784)
Back To Itineraries