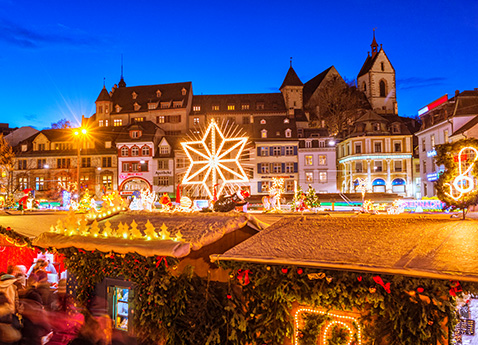 Christmas on the Rhine 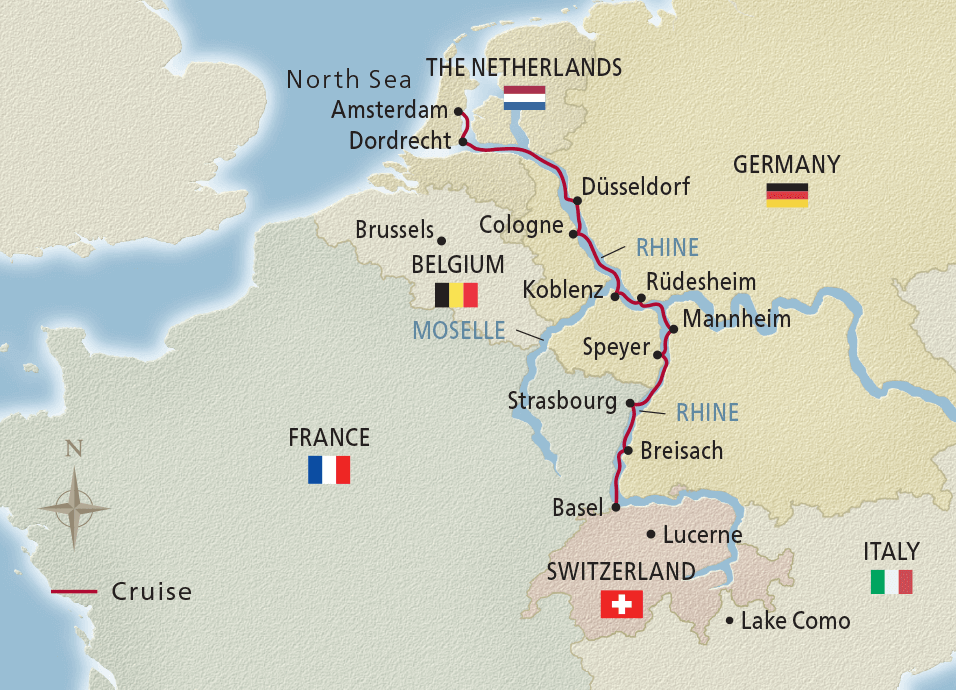 Immerse yourself in the spirit of Christmas as you journey through storybook villages. Sample tasty yuletide treats and regional delicacies as you browse colorful stalls for handcrafted ornaments and unique gifts. Admire the twinkling lights of Cologne and revel in the merry atmosphere of the Rhine Valley, as storefront displays, wine cellars and markets embrace the holiday season. This 8-day voyage is a joyful celebration of festive cheer.
Request More Information

Embark your ship and settle into your stateroom. A delightful blend of old and new, Basel is Switzerland’s best-kept secret. During the holiday season, the medieval Old Town is transformed into a magical yuletide affair. Cobblestone streets are lined with wooden chalet-style huts selling all manner of festive treats and gifts. Visitors to the Christmas market can enjoy a warming cup of aromatic glühwein in a decorated boot-shaped mug. Hand-carved tree decorations, cheerfully painted ceramics and delicious food are sold from stalls throughout the city.

Breisach is built on a basalt rock outcropping in the Rhine plain, opposite its French sister city, Neuf-Brisach. It is located in one of the warmest parts of Germany, across the river from French Alsace, famous for its wine growing. But Breisach, too, can boast about its wine: it is home to Europe’s largest cellars, with a storage capacity of more than 160 million liters. The most prominent landmark of Breisach is the Romanesque-Gothic St. Stephen’s Cathedral, built between the 12th and 13th centuries. Its two towers are visible from throughout the city and from the Rhine.

Strasbourg is said to be the capital of Christmas in France, with the city’s cathedral square taking center stage as it is transformed into a winter wonderland. The city’s Christkindelsmärik is the oldest in France, dating back to 1570. Hundreds of stalls are brimming with colorful wares, fine food and mulled wine, bringing festive cheer in abundance. Alsatian specialties feature an array of hearty classics, from bretzels (soft, bread-like pretzels) to bredele (star-shaped spiced cookies), and knacks (sausages) to pain d’epices (gingerbread).

Mannheim’s Christmas market is a holiday season shopping extravaganza, centered around the city’s iconic water tower. One of Germany’s oldest and largest markets, more than 160 booths host vendors from around the world, offering handicrafts and handmade items. Beautiful glassware, and carved wooden toys and games, sit alongside Christmas lanterns, colorful baubles and ornaments, all of which are presented in quaint wooden houses. Luxurious cashmere scarves, sheepskin mittens and felt hats are the ideal purchase to take home as gifts for friends and family.

The Rhine River flows through one of Germany’s most scenic regions. As you sail its most picturesque stretch, the UNESCO World Heritage Site of the Middle Rhine, you will pass vineyard-blanketed hills whose steep slopes require vintners to pick grapes by hand, keeping a centuries-old tradition alive. Admire splendid castles and dramatic rocks along the banks, all of which have stories to share. Perhaps you will marvel most at the Lorelei Rock at a dramatic curve in the river. Its eponymous river maiden mesmerized sailors with her song and lured them to their demise at her feet.

Themed winter markets feature across Cologne during the holiday season, inviting visitors to browse colorful market stalls for handmade gifts, beautiful artwork and colorful crafts. The towering Gothic Cologne Cathedral provides a stunning backdrop to the city’s festivities and array of offerings from its red wooden stalls. Beneath the pointed roofs of Cologne harbor’s tented market, unique crafted goods are displayed amid the twinkling lights of boats bobbing in the marina.

Sail the bucolic waters of the Rhine, deep into the Rhine–Meuse–Scheldt Delta, classic Dutch landscapes unfurl all around. Flat farmland, charming windmills and svelte poplar trees line the shores, and vast tracts of land stretch in all directions, growing all manner of bounty, from tomatoes to tulips. Gaze upon Friesian cows and tidy villages with their neatly laid farmhouses and marvel at how much of this land was reclaimed from the sea, saved by the stirrings of traditional windmills and the building of dikes.

A city of charming canals, elegant gabled houses, splendid museums and abundant bicycles, the Dutch capital of Amsterdam is a delight to explore. Its patchwork of waterways forms about 90 islands connected by 1,500 bridges. The legacy of the Dutch Golden Age lives on in gilded manses and in the lush paintings of Rembrandt and other Dutch masters that adorn the Rijksmuseum, The Netherlands’ grand repository of art and cultural history. Discovering Amsterdam is a pleasure best pursued on foot; visitors line the tranquil canals and linger over Dutch pancakes, or take a stroopwafel to go. After breakfast, disembark your ship and journey home.
Need more information?
Having trouble deciding which cruise is right for you?
Call Us Today at 1.888.804.CRUISE (2784)
Back To Itineraries