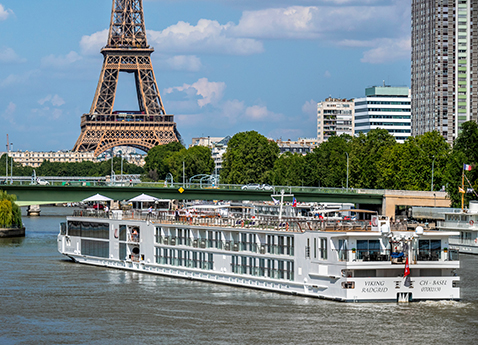 Paris & the Heart of Normandy 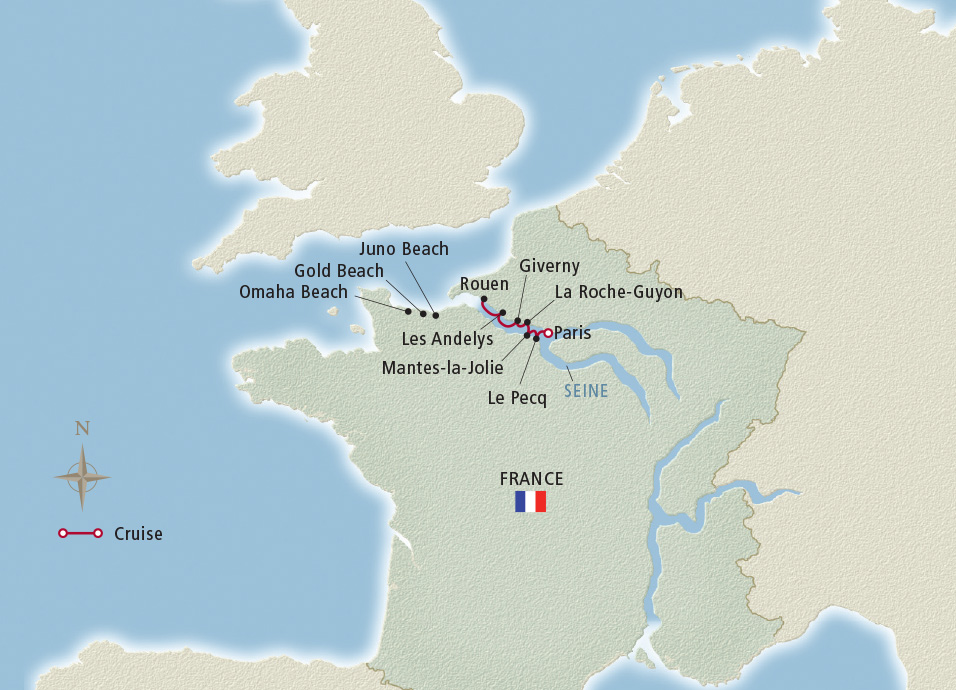 Dock in the heart of Paris, admiring views of the iconic Eiffel Tower and the Statue of Liberty’s smaller French twin from your ship. Experience history firsthand at the Normandy beaches and delight in Rouen’s Gothic architecture. Explore Giverny and Claude Monet’s charming house and gardens, the setting inspiring many of his renowned masterpieces. This voyage celebrates art, history, food and customs in France’s most alluring urbane and pastoral settings.
Request More Information

Arrive in Paris, romance capital of the world. Transfer from the airport to your ship, docked in the heart of the city, just a short stroll from the Eiffel Tower.* After boarding, take free time to explore Paris, or join our “welcome walk” to stretch your legs and get oriented.
(D)

After breakfast, embark on a tour of this dazzling city and marvel at its most remarkable sights, including the iconic Eiffel Tower. Take in the École Militaire (Military Museum), Orsay Museum and Latin Quarter, and resilient Notre Dame Cathedral. Then drive past the Louvre and Opera House and along the famed Champs-Élysées. This afternoon, you may join an optional tour to explore Montmartre Hill and the Sacré-Coeur or sample the delights of French cuisine during a food tour. Return on board for dinner and start your cruise on the Seine this evening.
(B, L, D)

Arrive in La Roche Guyon before breakfast and enjoy a morning at your leisure to explore. The village is officially classified as one of France’s most beautiful; you will see why as you stroll through the town’s narrow streets lined with picturesque houses with wood-paneled facades. After lunch, join an included tour to the town of Giverny, where Claude Monet resided from 1883 until his death in 1926. Visit the beautiful gardens and charming stone farmhouse where he lived and worked; see the water garden with the recognizable Japanese bridge, water lilies, wisteria and azaleas that inspired many of his masterpieces.† Dinner is served on board.
(B, L, D)

Indulge in leisurely morning cruising along the Seine. Spend the afternoon in the medieval city of Rouen, preeminent capital of Normandy. Begin with a walking tour through the center of Old Town, where you see the spectacular Gothic Notre Dame Cathedral, often painted by Claude Monet, and the famous Gros Horloge, a 16th-century astronomical clock. As you walk among the half-timbered storybook buildings, allow yourself to be transported back through time; see the 14th-century courthouse where Joan of Arc was sentenced to death and the nearby Market Square where she was martyred.

After breakfast, begin your full-day tour to the historic beaches of Normandy. Drive past Gold Beach, Courseulles sur Mer and Juno Beach on your way to visit such World War II landmarks as Omaha Beach, the American Military Cemetery and Arromanches Debarkment D-Day Museum. Alternatively, you may take a tour of Bayeaux, where you can admire the magnificent tapestry that chronicles the pre–Battle of Hastings events. Afterward, continue to Normandy’s coast and enjoy some free time at Juno Beach after your visit to the museum; then visit the Pegasus Museum. Return to your ship for dinner and relax on board, or take an evening stroll through Rouen.
(B, L, D)

Enjoy a leisurely morning cruise to the small town of Les Andelys, known for its imposing castle, Château Gaillard, built in 1196 by Richard the Lionheart. Disembark and join a guided walk to this fatally flawed masterpiece of Middle Ages architecture before returning to your ship.
(B, L, D)

After breakfast, disembark for a visit to Château de Malmaison, where Napoleon Bonaparte spent his final days in France. Along with the Tuileries, this elegant manor house, purchased by the emperor’s wife Josephine in 1799, served as the seat of Napoleon’s French government from 1800 to 1802. This afternoon, join an optional tour to the luxurious Palace of Versailles, former home of Louis XIV. This evening, you can take in the illuminated sights of Paris during a panoramic drive. Your ship remains docked in Paris overnight.
(B, L, D)

After breakfast, disembark and proceed to the airport for your return flight.* Or, extend your time in France’s romantic capital with a 3-night Paris extension.
(B)
Need more information?
Having trouble deciding which cruise is right for you?
Call Us Today at 1.888.804.CRUISE (2784)
Back To Itineraries