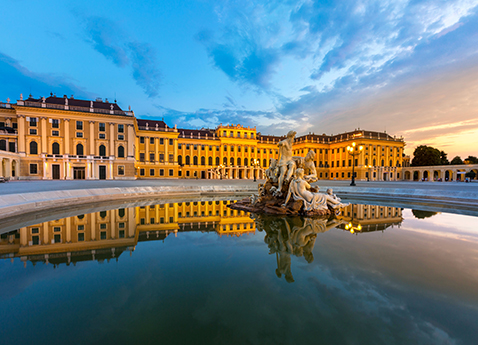 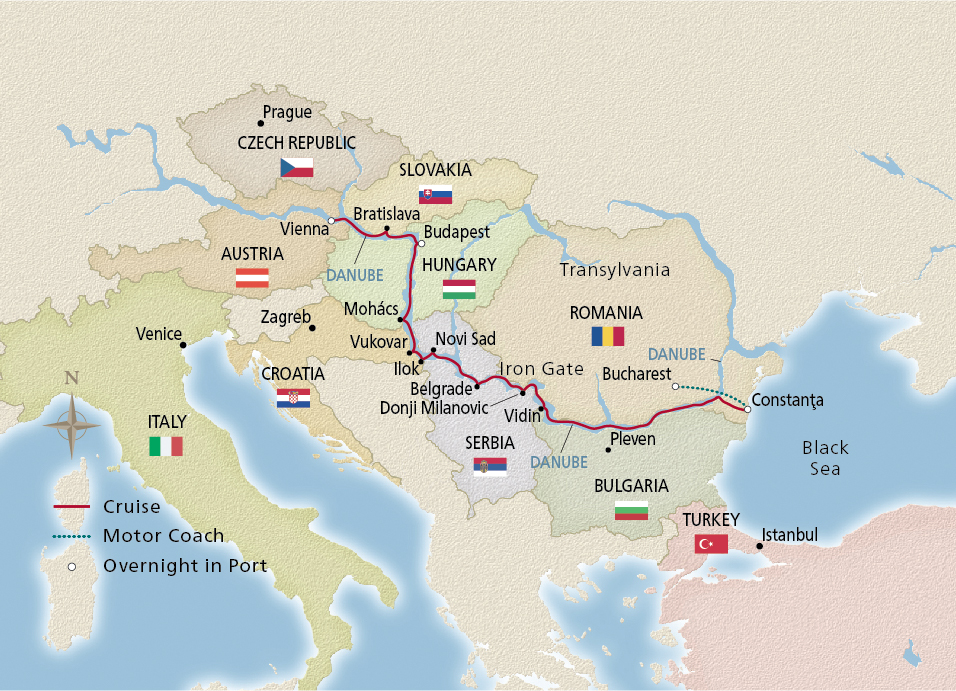 Discover the “City of Waltzes,” Austria’s elegant capital and European center of classical music. In Bratislava, view grand palaces from the Hapsburg-era and delve into Budapest’s vibrant culture. Be captivated by lesser-known gems as you visit towns and cities across the Balkans. Explore Bucharest’s old-world charm, tree-lined boulevards and witness its socialist architecture. With visits to five capital cities, this 17-day voyage is sure to inspire.
Request More Information

Transfer to your ship and settle into your stateroom. Renowned as the “City of Waltzes,” Austria’s capital city of Vienna is Europe’s center of classical music. Strauss and Mozart composed many of their finest pieces here. Vienna’s musical history is matched by the elegant, graceful architecture that lines the Ringstrasse. Baroque, neo-Renaissance, Gothic-Romanesque and other splendidly styled structures take the breath away with their grand facades. Vienna has a more intimate side too: inviting footpaths lead through green parks and its famed Viennese cafés sweeten any stay with coffee and the city’s delectable Sachertorte.

Streets lined with Baroque facades and grand imperial palaces are a legacy of the wealthy Hapsburg monarchy. The Hofburg Palace complex is home to the world-famous Vienna Boys’ Choir and elegant Lipizzaner stallions that perform at the Spanish Riding School, as well as numerous museums that play host to grand masterpieces. Behind the Hofburg, the lively MuseumsQuartiers showcases Austrian art in the former imperial stables, and the city’s musical heritage can be enjoyed at incredible venues across the city, from the Staatsoper to the acoustically renowned Musikverein.

The Slovakian capital of Bratislava is filled with lovingly restored baroque city palaces and leafy squares. The Little Carpathians rise steeply in the north and the enormous hrad (or castle) perches 300 feet above the Danube, lending the city a picturesque setting. Below the castle, the Old Town boasts elegant mansions, art nouveau houses and gracious pedestrian zones. Eleven Hungarian kings and eight queens were crowned in St. Martin’s Cathedral, today a concert hall that plays a central role in the city’s rich cultural offerings. Take in the natural beauty of the fabled “Blue Danube” as you pass through the Danube Bend, considered one of the most beautiful sections of the river. Cruising this 40-mile stretch through northern Hungary, you will see peaceful farmland and an ancient castle that once served as hunting grounds for royals and visiting dignitaries. As you sail the passage between the Börzsöny and Pilis Ranges, you will marvel at the steep hills draped with emerald-green forests. And delight in the majestic church domes peering at the waterway from inviting villages and historic cities.

Riverside beauty and a vibrant cultural scene blend together in Budapest to form one of Europe’s most rewarding cities. Hungary’s enchanting capital straddles the banks of the Danube, with traditional hillside Buda on one side and modern Pest on the other. By day, astounding art nouveau buildings, stalwart castles and glittering palaces set the stage for awe-inspiring strolls and long soaks in thermal spas. By night, a nostalgic glow settles in as the city’s lights dance on Danube waters, the Chain Bridge uniting it all as a dramatic centerpiece.

Budapest’s Old Town is a fascinating medieval patchwork of narrow streets and colorful houses. In the Castle District, the Matthias Church soars in gleaming Gothic glory. Adjacent, the expansive wall and seven turrets of Fisherman’s Bastion overlook the Danube, the graceful Chain Bridge and the Pest side of the river. The centerpiece of the district is the sprawling Buda Castle. Constructed in the 13th century and expanded to its current baroque splendor in the 18th century, this edifice was home to Hungary’s kings for almost 700 years.

Mohács is home to the annual Busójárás Carnival, which marks the end of winter and features busós—mask wearing, fur clad townsmen—parading and dancing through the town in celebration of the arrival of spring. Mohács was also the site of one of the bloodiest battles in Hungarian history, the Battle of Mohács, following the Ottoman invasion of 1526. The Mohács Visitor Center tells the story of the battle, which saw more than 17,000 Hungarian soldiers, including several notable leaders, lose their lives. The site’s mass grave was discovered during the 1970s and remains a poignant memorial to this day.

Vučedol culture flourished in Vukovar from 3000 to 2200 BCE, making this archeological park one of the most important in Europe. However, the town is better known for its recent history; in 1991, Vukovar came under siege during the Yugoslav Wars, becoming the only town in Europe to have suffered such destruction since World War II. Notable buildings have now been restored, including the Eltz Manor and the Baroque Church of St. Nicholas. Vukovar’s streets are best explored on foot; the town carries the echoes of the war and stories of bravery of those who lived here. Ilok’s vineyards have helped to firmly cement Croatia’s position on every oenophile’s map. For more than two millennia, the town has been producing some of the region’s finest wines, thanks to its superior soil and the climate of the surrounding hillsides. In the town, wine cellars can be found on every street, providing ample opportunity to sample a hearty vintage, and the remains of a Roman fort with evidence of a water supply system can still be seen. The 15th-century Ilok Castle presides over the medieval town, offering magnificent views of the Danube.

A European Capital of Culture, Novi Sad is Serbia’s second largest city. The Petrovaradin Fortress dominates the skyline and offers stunning vistas over the city, while the nearby historic neighborhood of Stari Grad is home to many of the city’s lively cafés, restaurants, museums and shops. Notable museums in Novi Sad include the Museum of Vojvodina, which houses collections and exhibits that showcase Serbian culture and life since ancient times. The Pavle Beljanski Memorial Collection features one of the most extensive collections of 20th-century Serbian and Yugoslav art.

The Serbian capital and former capital of the state of Yugoslavia, Belgrade is one of the oldest cities in Europe. Its location at the confluence of the Sava and Danube Rivers has long made it a contested region. Throughout its history, the “White City,” as its Serbian name translates, has been destroyed and rebuilt 20 times. Fortunately, the wide-reaching citadel remains, housing the Kalemegdan Fortress, Orthodox churches, Turkish baths and green parkland. Its Church of St. Sava is one of the largest Orthodox buildings in the world.

A gateway to the Djerdap National Park and home to an 8,000-year-old Mesolithic archeological site, Donji Milanovac is one of Serbia’s hidden treasures. The Djerdap National Park stretches out along the Danube River and is famous for its sweeping views of the Iron Gate gorge, within which lies Lepenski Vir, one of the most important archeological sites in Serbia and the oldest planned settlement in Europe. The site was discovered in 1960, unveiling several pristine sculptures representing human figures as well as tools made of bones and stones, and settlement ruins. Sail through one of Europe’s most dramatic natural wonders, the picturesque stretch famously known as the Iron Gate. Meander through narrow gorges that slice through the Carpathian Mountains to the north and the Balkan Mountains to the south, and marvel at the towering white limestone cliffs draped with forest. Be on the lookout for ancient remains upon the dramatic walls. On the Serbian side, Trajan’s Tablet was laid to mark the construction of a Roman military road; on the Romanian side, marvel at the enormous rock sculpture of Dacian king Decebalus.

One of Bulgaria’s oldest riverside towns, Vidin is home to the only entirely preserved medieval Bulgarian castle. Perched impressively on the riverbank, its striking pose, thick ring walls, stout towers and solid gates form a fortress known as Babini Vidini Kuli, which means Granny Vida’s Towers. Around the castle rose a fairy-tale town of 25 minarets, domes and other charming architecture of the period. Though many of these features have been shadowed by today’s city, Vidin retains its charms. Today it is largely an agricultural and trade center renowned for its wines.

Pleven is surrounded by limestone hills in an agricultural region of the Danubian Plain. It was a stronghold of the Bulgarian Empire and has more than 450 places of architectural and cultural significance. It was a key fortress during the Ottoman Empire and became an important trade center from the 15th to the 19th century. Several museums and monuments in the town are dedicated to the Siege of Pleven, fought during the Russo-Turkish War of 1877-1878. Today, the town is a major economic hub and the third largest in Northern Bulgaria.

On the shores of the Black Sea lies Constanța, a city steeped in history. A pleasant stroll along its boardwalk offers views over the Old Town, along which sits the iconic art nouveau building of the Constanța Casino. The towering minaret of the Grand Mosque presides over the city and a climb to the top rewards visitors with spectacular vistas over the ocean. Nearby, the Cathedral of Saints Peter and Paul is inspired by Romanian-style architecture of the 17th and 18th centuries, featuring a Greco-Roman style of pressed brick and a 114-foot-high tower.

After breakfast, disembark your ship and transfer to your destination. Bucharest is Romania’s cultural capital. Its original fortress, the first of many, was built to protect the Walachian state from the Turks. Today, it is a city of elegant French-style boulevards, lush gardens and green expanses, including the tranquil Bucharest Botanical Garden. The historic Lipscani district exudes the old-world charms of cobblestone alleys, inns and shops. The sprawling Palace of Parliament is the world’s largest civilian building, said to contain 3,000 rooms. Arrive and check in to your hotel.

Communism changed the face of Bucharest and has left in its wake a city brimming with imposing socialist architecture. Dotted among today’s cityscape are wonderful art nouveau buildings, ancient churches and monasteries that were rescued from the bulldozer. From the 18th-century church Schitul Maicilor to the 16th-century Mihai Vodă Church, it is best to discover these treasures on foot. Bucharest is also home to an array of world-class museums, including the George Enescu National Museum, which features a beautiful oyster-shaped glass awning.

Bucharest is home to one of the finest examples of Brancovan architecture. The 18th-century Stavropoleos Monastery is renowned for its ornate interior and beautifully detailed decor. The church’s resident choir is internationally recognized, as is its library with its collection of Byzantine music books. Bucharest’s culinary scene is elegantly understated and homestyle fare can be found in quaint eateries throughout the Old Town. A regeneration has seen the capital’s streets transformed into a charismatic district, filled with hidden treasures. After breakfast, check out of your hotel and journey home.
Need more information?
Having trouble deciding which cruise is right for you?
Call Us Today at 1.888.804.CRUISE (2784)
Back To Itineraries