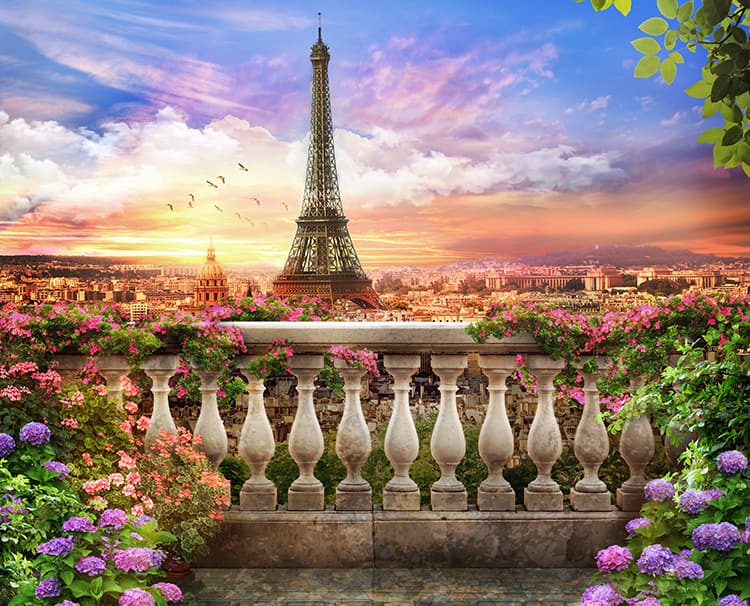 Impressions of the Seine & Paris 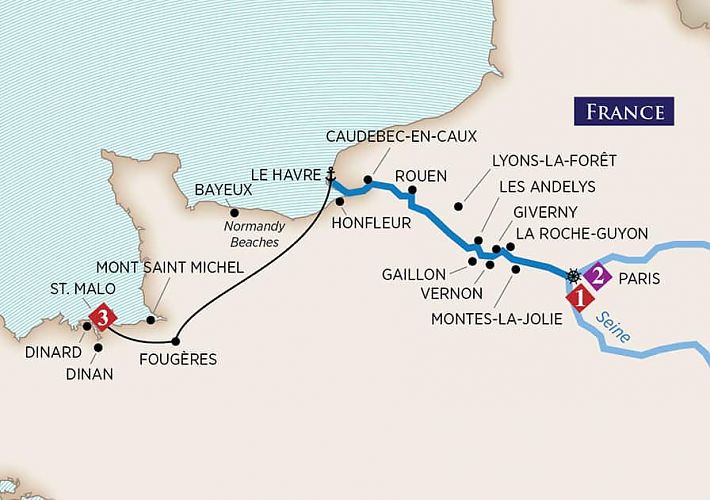 Discover the most renowned sites in Paris as well as sites memorialized by famous Impressionist painters along France’s Seine River. Meander through the renowned gardens of Château d’Ambleville and visit Monet’s home and gardens in Giverny. Indulge in Norman chocolate, cheese and cider and enhance your best self on guided bike tours through charming cities like Les Andelys. With fairytale castles, châteaux and idyllic scenery at every turn, this cruise is sure to inspire your own art – or at least conjure beautiful memories and dreams for years to come!
Request More Information

Board your ship in Paris for your Impressions of the Seine & Paris cruise. (D)

Enjoy some of Paris’ most famous sights during your panoramic tour. You will be guided through the charming Latin Quarter, home to the world-famous Sorbonne University, and through the stunning 400-year-old Luxembourg Gardens, created by King Henry IV’s widow, Marie de’ Medici. Afterward, travel through Paris and see such sights as the Champs-Élysées with its cinemas, sidewalk cafes and luxury specialty shops; the Arc de Triomphe; and the Eiffel Tower. (B,L,D)

The French commune of Mantes-La-Jolie was founded in the early Middle Ages and served as a port between Paris and Rouen. You’ll have three different ways to explore this port, each with a knowledgeable local guide. The first is a city tour during which you may see some of Mantes-La-Jolie’s beautiful religious structures, like the Gothic Notre Dame de Mantes, followed by a unique visit to a bee farm. Or, visit the distinctive Château d’Anet, an elegant Renaissance château built in the 16th century by King Henri II for his mistress, Diane de Poiters. In the afternoon, you may choose to enhance your best self with a bike tour and venture further through the city to take in more of its history and charm. Or enjoy scenic cruising through Vexin Français Regional Nature Park to La Roche-Guyon. Alternately, you can visit a local farm in La Roche Guyon where you can tempt your palate with a calvados, cider and cheese tasting. (B,L,D)

Experience the colorful splendor of Claude Monet’s magnificent gardens at his former home in Giverny, taking in the water lilies, Japanese bridges and graceful willow trees immortalized in his paintings. For a more active adventure, pedal through Vernon on a guided bike tour. Or journey to Château de Gaillon, a picturesque Renaissance-style castle, as well as the beautiful Gardens d’Acquigny, boasting waterfalls, bridges, canals and a wide variety of trees and plant life. (B,L,D)

Spend the morning enjoying medieval Rouen with a choice of several excursions. Join a walking tour past the imposing Notre Dame Cathedral, painted numerous times by Monet, and see the square where Joan of Arc was martyred, as well as the Medieval Quarter and Great Clock. You also have the choice to explore Lyons-la-Forêt, built on the site of a former fortress and featuring remarkable centuries-old architecture, followed by the idyllic castle Vascoeuil with its octagonal tower, art exhibitions and sculpture park. Or go on the “Tastes of Normandy” tour, where you’ll be treated to the delicious flavors of the region, including chocolate, macaron, Norman cheese and cider. Later in the day, maximize your relaxation with a scenic cruise to Caudebec-en-Caux or instead pedal your way from Rouen to Caudebec-en-Caux, enjoying the fresh air and exercise along the way. As an alternative, experience another local château, the Château d’Etelan – the first Italian Renaissance Château built in France in 1494, where you may see a wonderful chapel with original wall paintings and the guard house dating back to 1350 in an amazing landscape. (B,L,D)

Caudebec-en-Caux is your gateway to a number of excursions. Visit Bayeux, with a medieval city center and the world-renowned Bayeux Tapestry, which depicts the 1066 Norman invasion of England, followed by a visit to Caen, where one of the top sites is the Château de Caen, an 11th-century castle built by William the Conqueror. Or instead, admire the 30-acre Harcourt Arboretum, with its nearly 3,000 trees, as well as the palatial Château du Champ de Bataille and the commune of Le Bec-Hellouin, known for its 11th-century abbey. Or, choose instead to enjoy a scenic cruise from Caudebec-en-Caux to UNESCO-designated Le Havre, where you can spend your afternoon on a guided walking tour or bike tour. (B,L,D)

You can choose an excursion to the seaside town of Honfleur, renowned for its picturesque harbor, and for being an inspirational site for Impressionist painters. Or you can also choose a full-day excursion to see the historic Normandy Beaches, where you may visit such sites as the cemetery at Colleville-sur-Mer, Omaha Beach, the artillery battery at Longues-sur-Mer and the village of Arromanches, where the remains of the floating harbor used during the WWII landings can be seen. (B,L,D)

Disembark your ship in Le Havre and prepare for your return flight home. (B)
Need more information?
Having trouble deciding which cruise is right for you?
Call Us Today at 1.888.804.CRUISE (2784)
Back To Itineraries