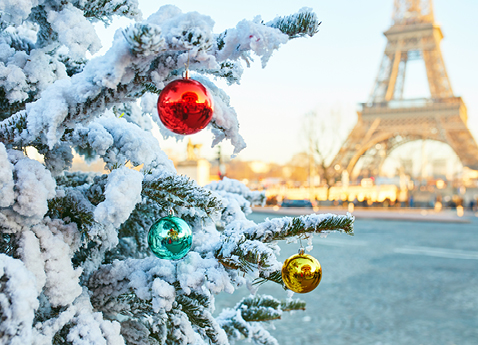 Christmas on the Seine 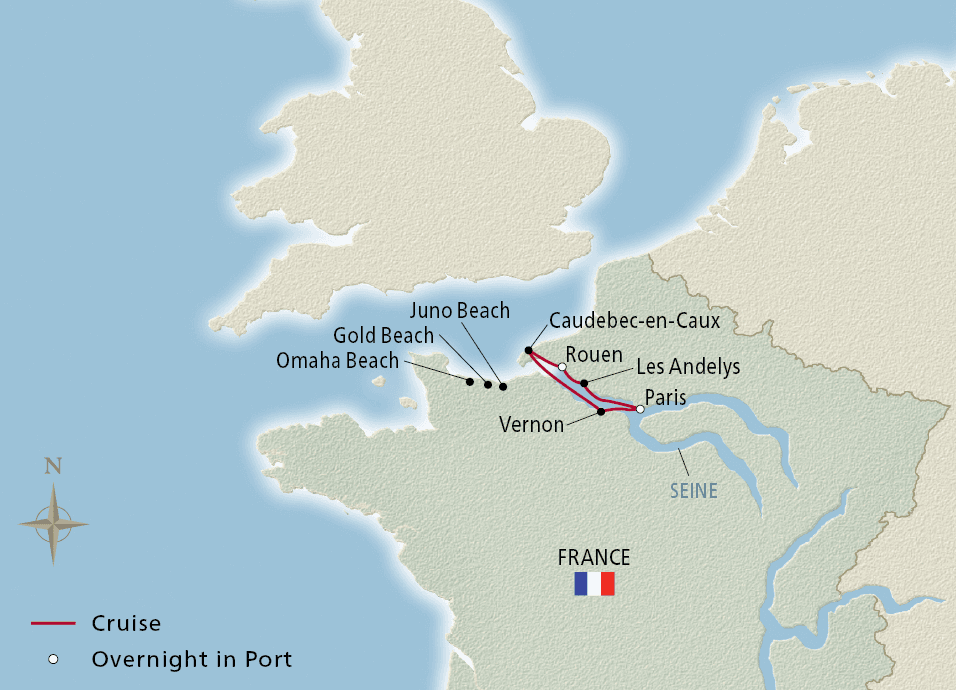 Embrace the holiday season with a taste of Joyeux Noel. Explore Paris, France’s twinkling “City of Light.” Sail through the snow-covered landscapes of Normandy’s countryside and admire the scenes of fairy-tale villages along the way. Enjoy the scented aroma of mulled wine and roasted chestnuts amid a festive backdrop of Christmas markets. Onboard festivities include regional dining specialties, seasonal treats and more to celebrate the holidays.
Request More Information

Embark your ship and settle into your stateroom. Long a hub of French culture and cuisine, Paris is one of the most romantic destinations in the world. Over the centuries, Parisian culture has been built on the wings of inspiration. Music, film, architecture, literature, dance and the visual arts all have their brilliant place in the museums, theaters, bookstores and remarkably preserved buildings of this magnificent city. At the center of it all is the Champs-Élysées. With its inviting riverside promenade, graceful bridges and splendid views of all things Parisian, from the Eiffel Tower to the Louvre Museum.

Paris’s landmarks come alive during the Christmas season as twinkling lights adorn the city’s streets. Shop windows are a grand affair, depicting scenes from fairy tales, Santa Claus and his workshop, or a snowy winter wonderland. While it rarely snows in Paris, there is always the chance of a dusting, adding to the magical atmosphere. From November on, leading department stores, including Galeries Lafayette and Printemps, present their seasonal displays, often featuring clever animation; their grand openings are hotly anticipated each year.

Vernon is a charming provincial town. Its cobblestone streets are reminiscent of the Middle Ages, and some of its half-timbered houses feature magnificent wooden carvings. The town was founded by the Viking Rollo in the 9th century, where an island in the Seine made for easy crossings. Because of its importance as a transit point between Paris and Rouen, the town was well fortified and frequently besieged. Ruins of its old medieval bridge still linger on the Seine’s right bank. The remains of La Château des Tourelles are the last surviving witness to that era.

Caudebec-en-Caux is a picturesque town with quaint houses lining the banks of the Seine River. It is known for its Gothic-style church of Notre Dame, which features ornate stone carvings and impressive stained glass windows. The town also features some of Normandy’s oldest buildings; the Maison des Templiers, built in the 12th-13th centuries, and the 14th century old prison, which is now a charming stone house. The nearby Abbey of St. Wandrille was one of the first Benedictine abbeys in Normandy and has remained an important spiritual center since its founding.

The landmarks and streets of Rouen are aglow with twinkling lights during Advent. Half-timbered houses don decorative displays along the pedestrianized Rue du Gros Horloge and the city’s main squares play host to street performers. At the Place du Vieux Marché, skaters perfect their skills on the ice rink, while at Cathedral Square, more than 70 market stalls form the annual Christmas market. Square Verdrel, by the Fine Arts Museum, transforms into a winter wonderland bringing a magical atmosphere to its landscaped green spaces.

Les Andelys is best known for its imposing castle overlooking the city, the Château Gaillard. Built in 1196 by Richard the Lionheart, the castle and the village’s strategic location bolstered the importance of Les Andelys throughout the Middle Ages. The town also gained notice for its Sainte Clotilde Miraculous Spring, where the wife of the first Frankish king, Clovis, turned well water into wine to serve the builders of her Benedictine monastery. Europe’s devout, upon hearing of the act, flocked here on pilgrimages until the end of the 19th century.

Parisian Christmas markets are filled with good cheer as mulled wine, roasted chestnuts and tasty morsels of cheese and chocolate are served across the city. Tuileries Garden is the largest marché de Noël in Paris, combining traditional market stall offerings with carnival themed attractions. Its Ferris wheel offers a prime spot to view the city from above. The charming Montmartre district offers the perfect place to shop for unique handcrafted gifts, while the Hôtel de Ville provides a stunning backdrop to its stalls, bathing its neoclassical facade in twinkling lights.

One of the most pleasurable activities in Paris is whiling away the time in one of the city’s outdoor cafés. Whether you are sipping a café au lait or a kir royale, there is no better way to feel like a Parisian. The hub of social and culinary life, cafés have been part of the city’s fabric since the 1600s. During the 20th century, literary and artistic figures—such as Ernest Hemingway, Colette and Pablo Picasso—famously met over drinks to share their works and ideas. Today, thousands of cafés line the pavements and squares to connect with France’s culture and history. After breakfast, disembark your ship and journey home.
Need more information?
Having trouble deciding which cruise is right for you?
Call Us Today at 1.888.804.CRUISE (2784)
Back To Itineraries