Meet the Newest of the Holland America Line Ships

Written by The CruiseExperts team. Posted in Holland America Line 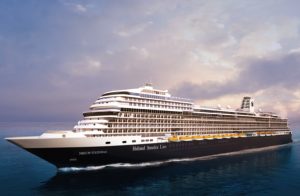 Another new cruise ship launch is on the horizon for Holland America Lines.  The newest of the Holland America Line ships “ms Nieuw Statendam” is scheduled for delivery and its 14-day maiden voyage across the Transatlantic to Fort Lauderdale in December 2018.  This marks the second in the Pinnacle-class line of HAL ships.  The name also takes its place along five other Statendam ships and will carry forward the signature style and service of its predecessors.  In a statement referencing the new cruise ships in the Pinnacle-class line, Orlando Ashford, president of the Holland America Line Ships stated that this was another chapter in the long history and evolving story of the company. 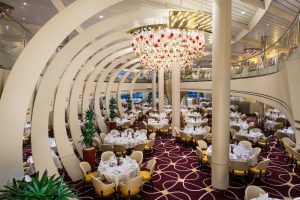 When Holland America Line introduced the new Pinnacle-class ships, it unveiled a new era in design approach for this line. Some Hallmark features of the ms Nieuw Statendam are the lavish interiors inspired by the smooth undulating lines of musical instruments.  Although many elements of its sister-ship ms Koningsdam will be replicated on ms Nieuw Statendam, Architect Bjørn Storbraaten and Hospitality designer Adam Tihany have raised the bar with some new innovative concepts.  At its core, a breathtaking refulgent atrium capped by the ebb and flow of high definition projections heighten the sophistication and drama of this new cruise ship. Guest may also be pleased to find several additional tweaks on this new cruise ship that have been incorporated based on feedback from former cruisers on ms Koningsdam.

Entertainment plans for Nieuw Statendam include a new Lincoln Center Stage and Billboard Onboard venues in addition to the B.B. King’s Blues Club that will complete the “Music Walk” experience. Onboard activities such as wine-blending and tasting classes at the BLEND by Chateau Ste. Michelle, BBC Earth Experiences, Digital Workshop to hone video production skills, Greenhouse Spa & Salon, Club HAL and The Loft, movies at the swimming pool and so much more. 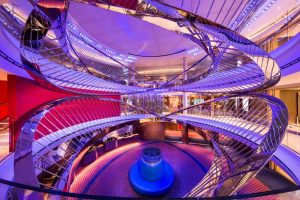 Ms Nieuw Statendam takes dining to new levels with the introduction of a new dining facility that has not yet named. In the meantime, guest can enjoy Holland America Line’s signature burgers by the pool at the Dive-In or dine in any one of sumptuous dining areas such as the Pinnacle Grill, Canaletto, Tamarind, Rudis Sel de Mer, Grand Dutch Café and G Gelato or enjoy a relaxing in-room meal anytime of the day.

As the second ship in the Pinnacle class, Ms Nieuw Statendam is a 99,500-ton ship that will carry 2,666 guests. After leaving Italy, the ship’s premiere voyage will take passengers to Cartagena, Málaga, Spain, Funchal, Madeira before repositioning to its Caribbean Winter port.  During its inaugural season between the Winter of 2018 and Spring of 2019, Nieuw Statendam will cruise to various Caribbean destinations such as the Dominican Republic, San Juan, Puerto Rico, St. Thomas, U.S. Virgin Islands. All will include a call at Half Moon Kay; the line’s private Bahamian Island. 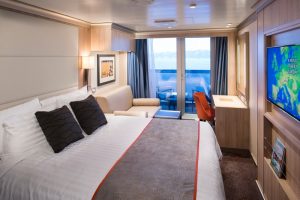 The Nieuw Statendam will not only reflect the proud traditions of the Holland America Line Ships but also take a bold step in ship design and the cruising experience into the future.

To find out more about ms Nieuw Statendam’s Premiere Voyage, inaugural and other seasonal cruises call a travel expert at CruiseExperts.com.  We can help you to plan a vacation on one of the Holland America Line Ships or help you choose from an endless selection of cruise types and destinations. You can also learn more about the 1-2-Free special happening now until April 30, 2017.

Call 1-888-804-CRUISE (2784) and, don’t forget to like us on Facebook and join our InnerCircle for exclusive offers and cruise news you can use! Also, check out our new Resource Center, where you can receive expert knowledge from us before your next cruise or cruisetour!