The Largest Cruise Ship is Being Built (Yes, it is Royal Caribbean)

Written by The CruiseExperts team. Posted in Royal Caribbean Int. 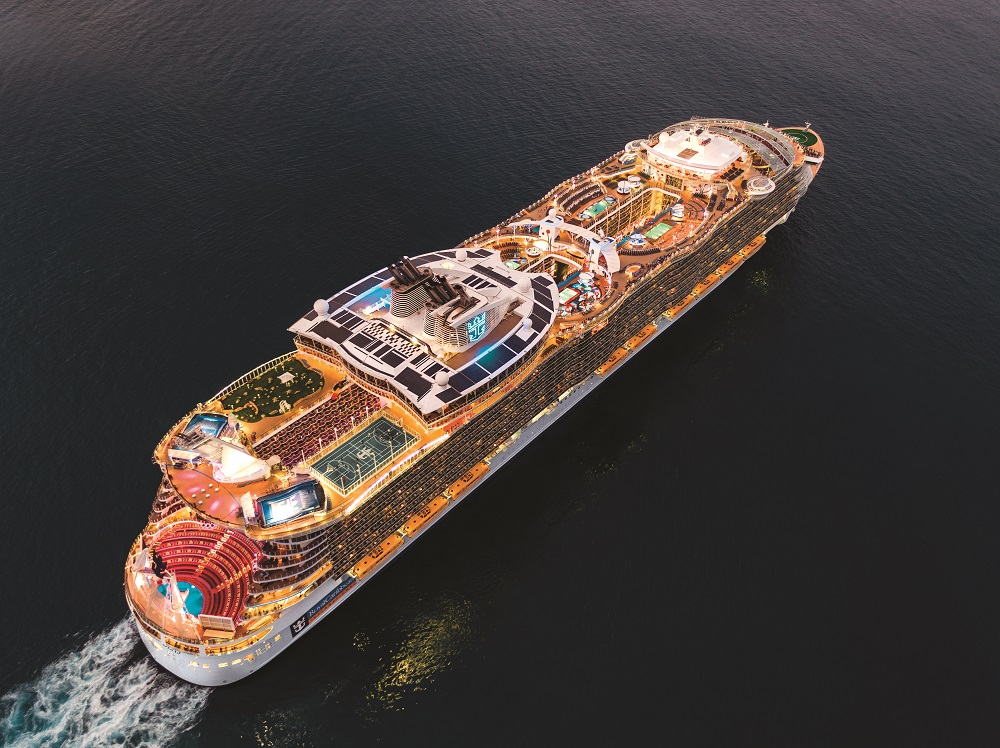 Meet the world’s largest cruise ship, the stunning Symphony of the Seas

Construction is in full swing on Symphony of the Seas, the stunning vessel that will be the world’s largest cruise ship when it is built. Thousands of workers have labored for more than a year building the gigantic vessel at a shipyard in France, and it will be almost another year before preparations are finished. The 1,188-foot long ship will weigh 230,000 tons when complete, outweighing sister ship Harmony of the Seas, the last vessel named world’s biggest cruise ship, by more than 3,000 tons. Symphony is the newest addition to Royal Caribbean’s record-breaking Oasis class series, which includes several previous holders of the world’s largest ship title.  Symphony is scheduled to debut in April 2018 and begin taking passengers through the Mediterranean.

Collectively, Royal Caribbean’s Oasis Class ships are the largest passenger ships in the world. All three of the Oasis class ships currently on the sea are in excess of 225,000 tons, making them 30% larger than the next largest cruise ships.  Symphony of the Seas is slightly longer and wider than the rest of the Oasis fleet. Symphony will feature 28 more staterooms than Harmony, the next largest passenger ship in the world, bringing the ship’s total to 2,775 staterooms. The vessel can accommodate 5,535 passengers at regular (double) capacity, and 6,780 at full capacity, plus 2,175 crewmembers. Symphony will have 189 suites, plus more balconies and ocean-view cabins to choose from than any other ship. Even inside rooms without windows will include Royal Caribbean’s exclusive Virtual Balconies, cutting-edge technology that delivers floor-to-ceiling displays with a real-time view of the waters outside the ship.

Happy Traveler Comment
Cesar has been very helpful and courteous. I have a family of 7 so a cruise such as we are taking really does take some arranging with which you folks have really done well. I am sure when we cruise again in the future we would give you folks first opportunity to serve us. — Ken B.

The new vessel will be packed with tons of fabulous features and amenities, including some it shares with sister ship Harmony of the Seas, previous holder of the title of world’s largest cruise ship. The world’s two largest cruise ships take advantage of their size to offer Ultimate Abyss, the tallest slides at sea. Two swirling slides take riders on a 10-story twisting plunge down to one of the lowest decks on the ship. Other attractions include a 40-ft long surf simulator with stadium seating, a multi-level water park, two 40-ft. rock-climbing walls, ice rink, zip-line, and three high-speed slides. There is even an adults-only Solarium and a Bionic Bar where robot bartenders will serve your favorite libations!

Symphony will offer something for everyone, with unique “neighborhoods” including a Boardwalk with full-size carousel and the Royal Promenade, a two-deck high interior mall where travelers can stroll through an upscale marketplace complete with bars, eateries, and shops. Younger travelers will love the Youth Zone, billed as the largest youth facilities at sea with activities for toddlers to teens. Of course, guests aboard Symphony of the Seas will enjoy VOOM, the fastest internet at sea, the latest in cruising technology, exceptional entertainment, and superb dining options.

The world’s largest cruise ship is so enormous, in fact, that Royal Caribbean is building a new terminal in the Port of Miami to accommodate it. After Symphony of the Seas spends the first few months of 2018 sailing in the Mediterranean it will move to the new terminal in November 2018 and begin sailing cruises from Miami to the Caribbean. In late 2018 Symphony will be joined by another Oasis class ship, Allure of the Seas, which is currently docking in Ft. Lauderdale.

Call CruiseExperts.com at 1-888-804-CRUISE (2784) to book your reservation aboard Symphony of the Seas, the largest passenger ship in the world, today. Reservations start with a 7 day Mediterranean West cruise departing April 21 with Rates from $1048. If April is too long to wait, CruiseExperts.com can reserve your spot on one of the hundreds of itineraries that Royal Caribbean’s fleet of ships currently offer. Don’t forget to like us on Facebook and join our InnerCircle for exclusive offers and cruise news you can use! Also, check out our new Resource Center, where you can receive expert knowledge from us before your next cruise or cruisetour!